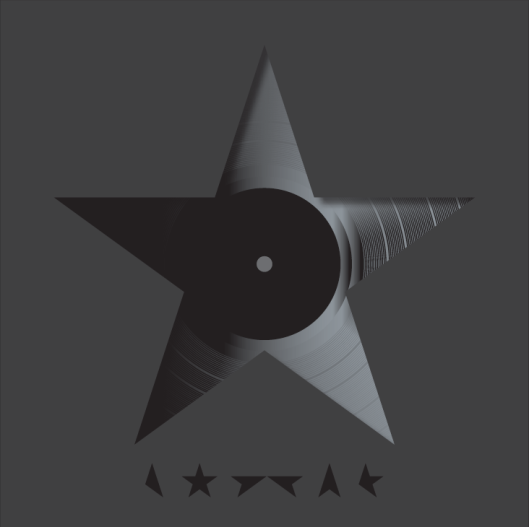 David Bowie is a savvy enough consumer—and manipulator—of popular media to understand that he will never produce another “TVC 15,” another “Ziggy Stardust,” another “We Are the Dead.” Those days are long gone and his gift has morphed over the decades into … something different. There have been peaks and valleys since his remarkable 10-album run in the 70’s, but even the peaks (1. Outside, Black Tie White Noise, and Heathen, e.g.) paled in comparison to the earth-shattering impact of his best earlier records.

The Next Day, his “comeback” album from 2013, was a strong addition to the post-70’s Bowie oeuvre, but ultimately played as too derivative and self-referential to be memorable. Its charms evoked past glories in a nearly convincing way, but it broke little new ground and therefore—for a Bowie record—it felt like a lesser effort.

George Carlin once said that “it’s important in life if you don’t give a shit, it can help you a lot,” and David Bowie, on his 69th birthday, with the release of ★, has clearly arrived at his quintessential moment of not giving a shit. While there were tunes aplenty in The Next Day, ★ (Blackstar) is memorable more for its difficulty, its unusual syncopation, its oblique messaging, and, yes, its hard-earned thorny beauty. The lack of any detectable desire to be “commercial” has proven to be its creator’s liberation.

And speaking of giving a shit: as with The Next Day, you can certainly wonder whether anyone who is not already a Bowie fan will care much about ★. That is the curse of the few remaining “classic rock” musicians still releasing new music … no one cares. People will still line up in droves to see human jukeboxes like The Rolling Stones perform their greatest hits (almost all of which were recorded during a 5-year period in the late 60’s-early 70’s), but no one outside deep fandom wants or would care about a new Stones album.

But Bowie, in his deliberately obstinate way, has burrowed into that paradigm and eaten his way out the other side: he refuses to tour (which is the current working musician’s only reliable way to make big bucks), he grants no interviews, and he drops new music with (relatively speaking, at least) little advance fanfare. It’s as if he knows no one cares … and yet in his very withdrawal from the PR game, he has recaptured that one element that eludes almost everyone else in his field: a sense of mystery. What’s he on about? What does this record mean? A 10-minute chamber-pop single with three disparate sections tied together? A backing band of jazz musicians? One guitar solo on the whole album? Where’s “Rebel Rebel”? Where are the damn rockers?

His only real remaining peer in popular music is Bob Dylan. Both have drilled down deep into the heart of their respective mythos and produced late-career records that can stand comparison to those of their youth.

One of the first things that leaps out at you after even just a few listens to ★ is what a “band” album this is. (Here’s the core band of ★ in action, away from David Bowie.) These guys are amazing and are as integral to the ambience of ★ as Bowie himself is. The record feels “of a piece” and the stuttering grooves the band lock into, overlaid with waves of unearthly synths and the mind-blowing honking skronk of bandleader Donny McCaslin’s sax, conspire to make ★ feel in some ways like one extended suite.

Reinforcing this sense of cross-track continuity are the two (so far) music videos Bowie  has released in conjunction with the new album. In the short film for “★”, Bowie plays three characters, one of which is a stumbling, twitching man who wears a blindfold of gauze bandages and who stares out at the world with black buttons for eyes. This same character (now institutionalized and doing his twitching in a hospital bed) is one of two played by Bowie in the music video for “Lazarus.” Typical of Bowie, these videos are haunting, cryptic, and open to endless interpretation; one possible view is that it is only in helpless blindness (those black buttons) and removal from the modern world (by virtue of insanity) can one possibly hope to actually “see” with any profundity.

Bowie’s voice is relatively restrained throughout the new record. He sounds beautiful, frail, exhausted in places. There is a sense of a scarred seer having gained the mountaintop after a lifetime of bloody battles on the plains below. His singing has glorious moments, especially when he doubles his own lead vocal line or drops in achingly touching harmonies, but his fabled power-croon rarely makes an appearance; rather his voice has an ethereal, wispy vulnerability that bespeaks both timelessness and mortality.

★ comprises 7 tracks and clocks in at about 41 minutes. The best way to experience the music is via the ancient Side One/Side Two rhythm of an LP. Plus, you get a lovely package (die-cut gatefold cover, 180g vinyl, and glossy black-on-black combination lyric sheet/photo book). Some track-by-track notes:

“★“: The record’s masterpiece. A stunning three-part 10-minute suite that evokes “Station to Station,” not in a musical sense, but in the way that that lengthy multi-part leadoff title track set the tone for the marvelous record that followed. The opening and closing sections of the suite are reminiscent slightly of Earthling-era drum’n’bass … but here the groove is way deeper, and the Middle Eastern vibe is wonderful and ancient. The mid-song r&b section is lovely and hysterically funny: “I’mma take you home/take your passport and shoes/and your sedatives, boo.” Really, a majestic achievement.

“‘Tis a Pity She Was a Whore“: McCaslin’s horns are just ridonkulous on this wicked up-tempo rave-up. Bowie can’t contain himself, either, whooping (atypically) “whoa” at the sax solos toward the end of the song.

“Lazarus“: Lovely, lovely guitar-sax intro leads into Bowie’s pleading whisper. Nice cascades of electric guitar. More funny shit: “Look up here, man, I’m in danger/I’ve got nothing left to lose/I’m so high it makes my brain whirl/dropped my cell phone down below/ain’t that just like me.” The track climaxes with some of Bowie’s crooniest, most passionate singing on the record … and then outros brilliantly for TWO MORE MINUTES of vintage McCaslin sax work and the return of the pretty electric guitar figure that began the song.

“Sue (Or In a Season of Crime)“: Drummer Mark Guiliana drives this odd tale about god knows what, playing patterns that are tricky at first but ultimately irresistible. The band really wails in, around, under, and on top of Bowie’s weird, sometimes nearly atonal lead vocal. Fascinating stuff.

“Girl Loves Me“: Employing a kind of Clockwork Orange-y patois, this song at first seems a bit of a lark, kind of a lighthearted break from some of the heaviness of its predecessors … but the sheer aching drone beauty of the “girl loves me/hey cheena” chorus eventually breaks you down and you realize you’re in deeper waters than you thought.

“I Can’t Give Everything Away“: Can’t figure this one out. It has a harmonica (!), whose childlike presence seems almost shockingly warm in the midst of all this angst. Is David really singing about his entire career here? “Seeing more and feeling less/saying more but meaning less/this is all I ever meant/this is the message that I sent.” That is truly awful stuff. Would give “sophomoric” a bad name. Bowie has made a career out of confounding expectations in the most innovative and infuriating ways, of weaving complex and contradictory narratives throughout his work … to have that all reduced to “this is the message that I sent” would be criminal, and if that is the way Bowie wants to leave us, if this is in fact his valedictory track on his final album … Jesus, I’ll punch the guy in the nose if I ever meet him! Maybe I’m missing something here and will feel differently about the song one day. I have friends whose opinions I value who absolutely love it, so chances are there is something I’m not seeing. But this one and “Dollar Days” make for a disappointing end to an otherwise ravishing sonic experience … for me.

So, that’s it. At 69, in spite of how the world has turned, in defiance of how his industry has mutated almost beyond recognition, David Bowie has written, recorded, and released an album of new music that is unusual, difficult, experimental, brilliant, maudlin … it’s amazing the heights that not giving a shit and following your muse can allow you to scale.